This science game allows kids to practice and learn about amphibians. Amphibians can be described as animals like salamanders or frogs that share the same lifestyles, habits and characteristics.

Amphibian vertebrates, also known as amphibians, are animals that live primarily in freshwater ecosystems and terrestrial ecosystems. Many amphibian species are found in wetlands. However, some species are also found in saltwater habitats. Find out more about these amazing creatures online, and then play our worksheet and game!

Amphibians can be described as animals that have backbones and spinal columns. They are vertebrates, unlike invertebrates that do not have backbones. They live a part of their life in water, while a portion of their lives is on land. They cannot regulate their body temperature because they are cold-blooded. They rely on the sun for warmth. They are also unable to cool themselves, so they seek shelter in their burrows. They become slow and sluggish in cold weather. Their limbs also lose their elasticity.

Amphibians make up the crown group among vertebrates. This group includes the salamanders, frogs and newts.

The life cycle of amphibians is complex. For example, frogs lay eggs in water. The babies become froglets and tadpoles that can live in water. They lose their tails as they become adult frogs and can live on the land.

Amphibians have unique body shapes. Their skin is moist, which aids them in absorbing oxygen. They are able to catch bugs easily because of their long tongues. It can be quite interesting to see their diet. Many amphibians, such as toads and frogs, are carnivores. This means they eat other animals and insects. Some amphibians are herbivores which means they only eat plant material. Others are omnivores which can eat both. Amphibians are usually smaller than other animals, so they are more likely eat invertebrate prey like insects, spiders, and snails. 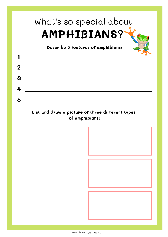 Evolution : Heritable Traits That Can Be Traced Back to Evolution Science Game

Carnivores and Herbivores Science Game for Kids
Scroll to top